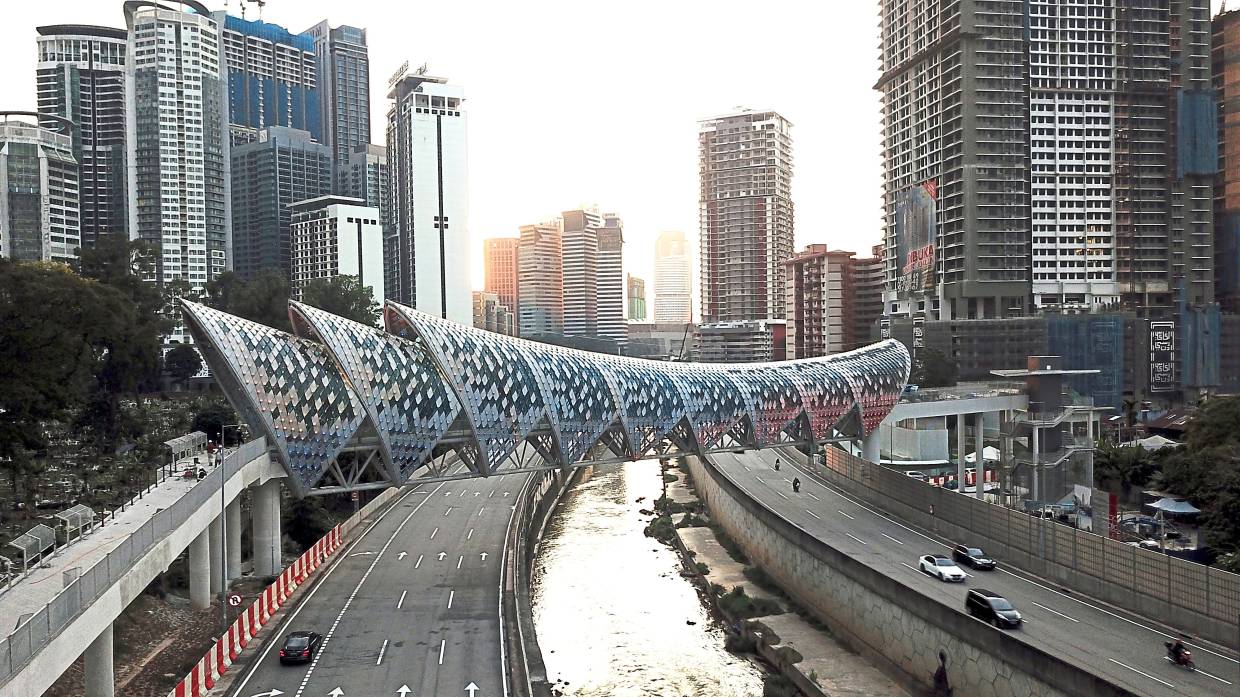 The week-old Saloma Link in Kuala Lumpur has already captured the hearts of many city dwellers after it opened last Wednesday.

Thousands have used the bridge since its low-key opening.

The link was commissioned by Kampung Bharu Development Corporation (PKB) to bridge the gap between Kampung Baru and Jalan Ampang, a chasm previously separated by Sungai Klang and the six-lane Ampang-Kuala Lumpur Elevated Highway (Akleh).

For office worker Mariana Mustapha, the pedestrian bridge allows her to buy food at more affordable prices at Kampung Baru.

“I work at Menara Public Bank and I use the bridge to get my lunch in Kampung Baru, ” said Mariana when met at the bridge a day after it opened.

“I believe more of my colleagues will join me soon.”

More office workers are also expected to park their cars in Kampung Baru and walk across to their workplaces located around KLCC.

However, prior to the bridge’s completion, there were already those who would park for free there and take the LRT from Kampung Baru to either KLCC or Ampang Park, which represents quite a savings as the only thing that needs to be paid for a full day’s parking is just the LRT fare.

Inspired by the sireh junjung (betel nut leaf arrangement) concept, which is an integral part of a Malay wedding, the Saloma Link’s adoption of this design element is meant to symbolise the “marriage” between the old and new parts of Kuala Lumpur, said Veritas Design Group principal Azril Amir Jaafar.

His company is not only involved in designing the aesthetics of Saloma Link, but also the master plan for Kampung Baru redevelopment.

“In the design, we chose the location carefully, with one of the important considerations being preserving an unblocked view of Petronas Twin Towers, ” said Azril, adding that this would not be just a pedestrian link, but a structure that also took into account providing social spaces for gatherings and community events. Other than providing universal access through a single lift on the Kampung Baru end, the Saloma Link also facilitates those pushing their bicycles up the stairs by incorporating a purpose-built slot along the stairway.

Over at Jalan Ampang side, a smooth ramp promises a soothing walk, with greenery along the Ampang Muslim cemetery providing a pleasant relief to the eyes.

“This link will enable more outsiders to access the area and allow them to understand what Kampung Baru is all about, ” said the sixth former who had yet to use the bridge himself.

The bridge was a welcome addition for the younger generation of the Kampung Baru population.

“It will be easier for us to guide foreign tourists on crossing over to KLCC from here.

“Not everyone fancies taking the LRT over, so now we can just point them to the bridge, ” said Nur Husnina Azman, 26, who operates a small business near the bridge.

While the functionality of the link as a pedestrian connector was never in doubt, the Saloma Link has also rightfully turned out to be an attraction itself.

Over the weekend, many people flocked to the area just to check out the bridge that has been visible for a long time as it was built over the past 18 months.

“I am so excited to be here today, ” said event photographer Rozmi Yunus, 47, who was gamely posing with his son, Umar Mukhriz, nine, in the afternoon heat.

“We live in another part of Kuala Lumpur, but we just had to come here to see this for ourselves, ” said Rozmi.

The Saloma Link is open from 5am to 1am Mondays to Saturdays, while the hours for Sundays and public holidays are from 5am to 12.30am.

Another Instagrammable spot in KL, the Saloma Link LED-Lit Saloma Link Connecting Kampung Baru To Nearby KLCC Is Now Open